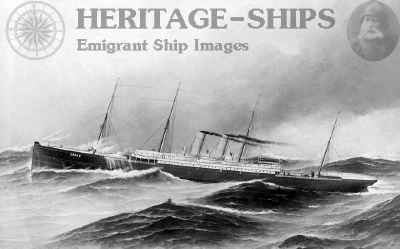 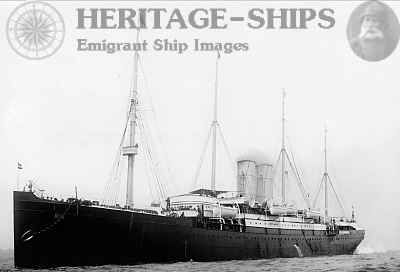 S/S Saale, Norddeutscher Lloyd
Support Norway Heritage: Purchase a copy
The Saale was a sister ship to the Trave and the Aller, all built in 1886. She was built by the Fairfield Shipbuilding and Engineering Company, (John Elder & Co. Govan, Glasgow). She was built to l accommodate 224 first class, 94 second class, and 850 third class (steerage) passengers in addition to officers and crew to the number of 170. The upper and main decks were of teak, and all deck houses were of steel and teak. The saloon was 50 feet long and 46 feet broad, and the interior fittings and ornaments were the work of the best decorators and artists of Germany. The woodwork was of oak, the hangings of red silk velvet, and the floor was covered with soft carpets, while the walls were hung with masterpieces of Munich artists. The ladies' cabin was furnished in blue plush and velvet, and the two smoking rooms in oak, with Japanese stamped leather. The second class dining room was on the main deck aft, and the steerage passengers were accommodated on the lower deck. All the modern improvements in the use of steam for navigation were adopted on the Saale, which carried 33 independent steam engines, with 65 cylinders. Her main engines were the largest triple expansion engines that had yet been constructed. The high pressure cylinder was 44 inches, the intermediate pressure, 70 inches, and the low pressure 108 inches in diameter, each was adapted for a stroke of 6 feet. All compartment bulkheads were closed with water-tight steel and iron doors, which were opened and closed from the deck, and an indicator under the eyes of the officer of the deck showed whether the doors were open or shut. In case of fire hose could be attached to pumps at 26 places on and below deck, and steam could be turned on in all parts of the ship.
SAALE